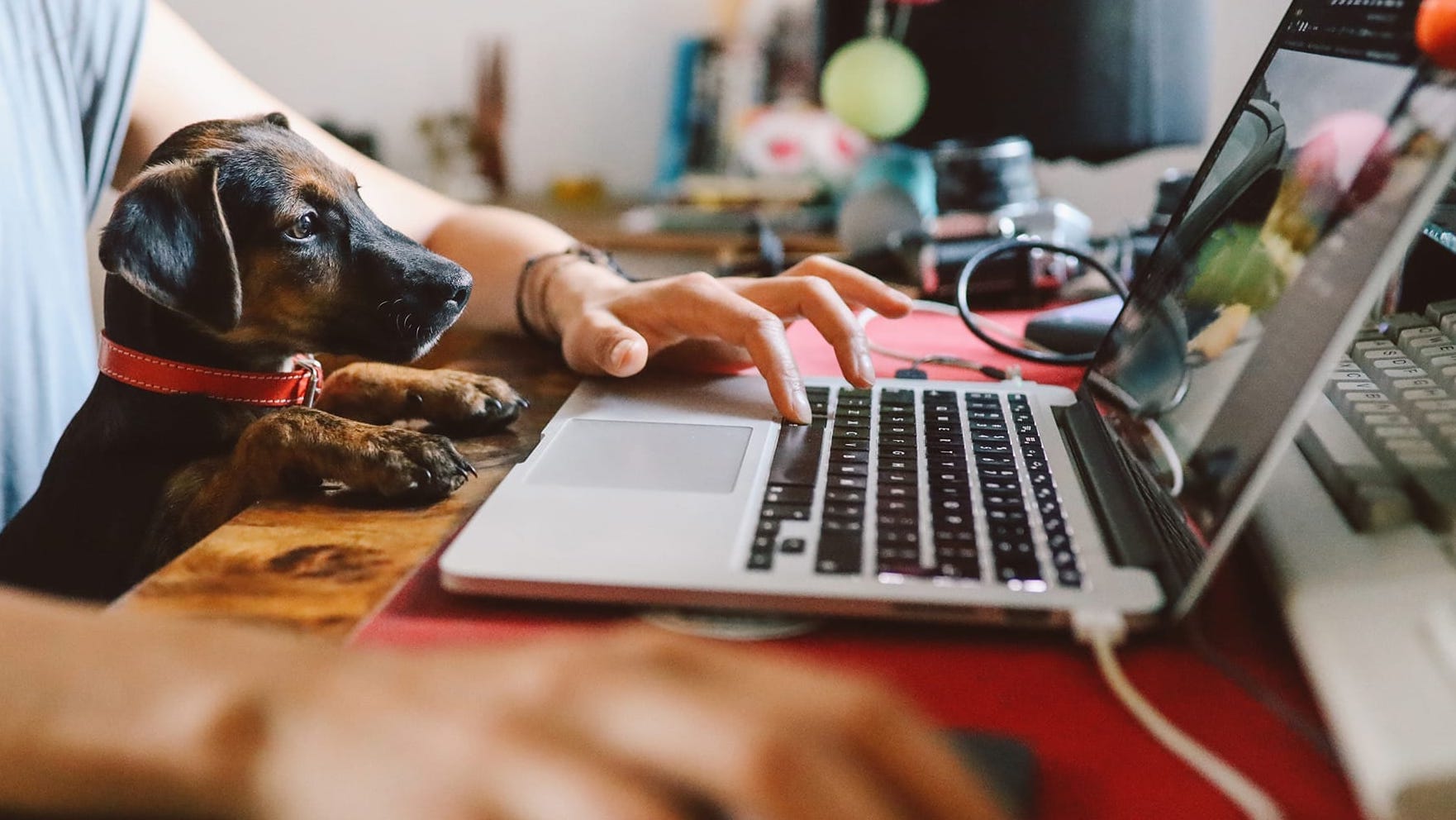 Meet some of the members of the Firefly family through pet-tale story. Each month we'll feature one of our clients and their pets. Have a story you would like to share? Email us at Info@fireflyvet.com‍

You Can't Keep A Good Cat Down!

Some people find Firefly Veterinary through a google search. Some through social media. And sometimes people find us through a friend who lives clear across the country. Well, not many of you, but Molly and her cat Brandon did. When this sweet, sometimes judgmental cat and his mom exhausted all options to find a supportive and knowledgeable team to help Brandon, she was sent to Dr. Sine. 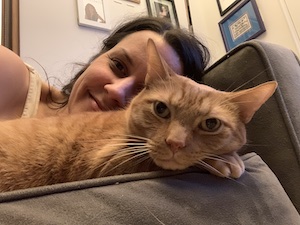 Q: How did Brandon become a part of your family?
Brandon was the neighbor's cat, and occasionally he would be on the stairs inside our building. I always thought he was cute. The neighbors moved out suddenly and left him behind. When I saw he was still around, I decided to take him in. So, I went to the store to purchase litter and food, and when I returned, he was gone. It was the middle of winter, and I was worried he had gotten lost outside. I search for days. I mentioned to the super that my cat was missing. It turned out that the tenant in the basement apartment took him. Yes, they stole my cat! I wasn't sure how to get him back since I had no documents or proof, he was mine. Luckily for both Brandon and me, they let him back into the main part of the building, and Brandon came running up the stairs to our apartment. The following day, I took him to the ASPCA van to get neutered, making him mine!

Q: What is Brandon like?
Brandon is EVERYTHING! He is the sweetest, most loving, cutest, funniest, smartest, softest, "orangiest" (he is very orange) most judgmental (update on this trait later) cat. I wouldn't have it any other way. I would like to phone a friend please! 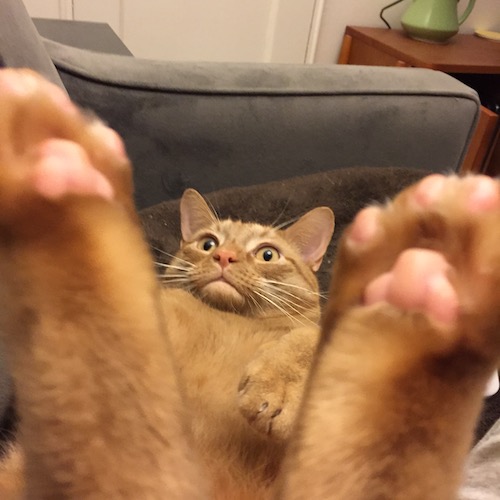 Q: What happened that brought you to Firefly Veterinary Hospital?
I noticed a lump on his scapula and took him to the vet near me in Queens. Worried aboutBrandon and what might be, I was surprisedand disappointed by the judgmental,uncompassionate staff. Many pet parents know that services and testing do not come cheap forany pet. After all the x-rays and bloodwork, I opted to get his biopsy and a second opinion withanother vet. Brandon's next visit didn't go as expected. We were told that a biopsy could not beperformed. They did not think it was cancer and sent me to an animal emergency hospital (thinkhuman ER but for pets!) for further help. I spoke with a surgeon there who took more x-rays,more $$$, and said it was likely cancer, and the option was amputation. What was I feeling?Exhausting, to say the least, traumatic, to say the most. In Seattle, a close friend who knew aboutBrandon's situation recommended his former vet, Dr. Sine, who haedout to Dr. Sine on my behalf and explained the situation. She asked that I call the office the nextday.

Q: How did the phone call go?
I called the office the next day, and immediately the front desk knew who I was. It was a welcomed change from all the other visits I had been to. When I spoke to Dr. Sine, she listened, cared, and didn't talk over me even when I spoke over her. She was empathetic and concerned and explained how they could help, which I wasn't expecting. She said they could do the surgery there. When I agreed, Dr. Davies immediately contacted the surgeon from the animal hospital to get the files and information needed. THEY WERE ON IT! 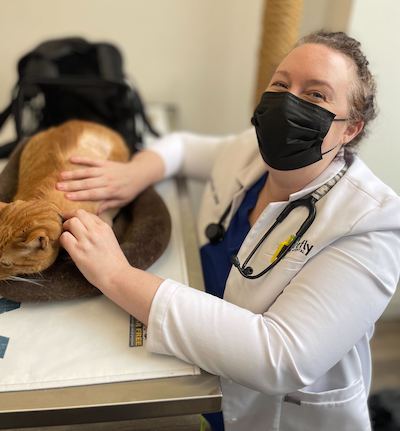 Q: What was your experience as a new patient at FVH?
I came in a few days after our call so she could meet and examine Brandon. We were greeted by the friendly and helpful front desk staff and then met with Dr. Davies, who would be performing the surgery alongside Dr. Sine. She was incredibly kind, knowledgeable, and caring. Not once did I feel rushed as she took the time to answer all my questions with ease and grace. I felt surrounded by good energy. She made everything easier.

Q. How did surgery go?
Brandon’s surgery went GREAT! It's scary, of course! Words like cancer and amputation are hard to hear. I was always worried about Brandon and how he was doing ad feeling. Those are the moments I wish I could communicate with him. Seeing your pet like this is hard and traumatic, but you have to know it will be ok. Dr. Sine kept in contact with me throughout the procedure to let me know how my best baby boy was doing. She talked me through every concern. It felt like we were her only focus. After we took Brandon home that eve, Dr. Sine personally followed up and was available for contact over the next several critical days. She concerned herself with the few hard parts and celebrated the milestones, of which there were many. When everything felt like it was folding in, Dr. Sine lifted us out and helped us in a way so profound. I look back on how it all worked out and the path that led us to Dr. Sine and the FVH Team; I am still in disbelief but feel so lucky! Her kindness will be remembered forever.

Q. How is Brandon doing now?
AMAZING! He hasn't missed a beat. He is still the cutest orange cat that loves to play and nap and is getting around just fine. One thing has changed... he is slightly less judgmental than before. 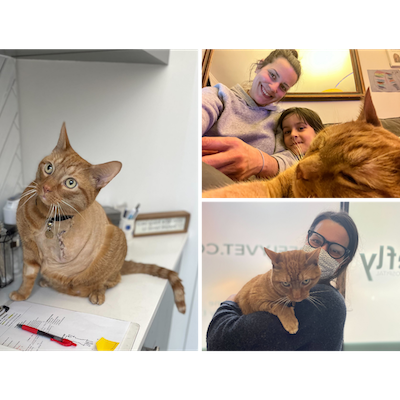